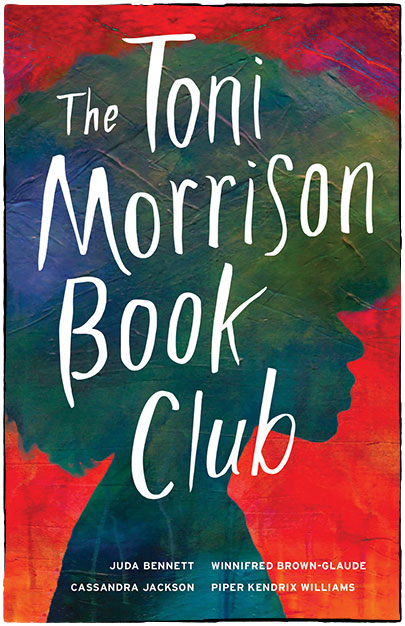 In this startling group memoir, four friends—black and white, gay and straight, immigrant and American-born—use Toni Morrison’s novels as a springboard for intimate and revealing conversations about the problems of everyday racism and living whole in times of uncertainty. Tackling everything from first love and Soul Train to police brutality and the Black Lives Matter movement, the authors take up what it means to read challenging literature collaboratively and to learn in public as an act of individual reckoning and social resistance.

Framing their book club around collective secrets, the group bears witness to how Morrison’s works and words can propel us forward while we sit with uncomfortable questions about race, gender, and identity. How do we make space for black vulnerability in the face of white supremacy and internalized self-loathing? How do historical novels speak to us now about the delicate seams that hold black minds and bodies together?

This slim and brilliant confessional offers a radical vision for book clubs as sites of self-discovery and communal healing. The Toni Morrison Book Club insists that we find ourselves in fiction and think of Morrison as a spiritual guide to our most difficult thoughts and ideas about American literature and life.

Part group memoir, part ode to Toni Morrison but mostly a collection of intimate and insightful essays on identity, gender and race, The Toni Morrison Book Club is unlike any memoir I’ve read before. It’s also possibly a very underrated book. I’ve barely seen it around and I genuinely hope it eventually finds its audience and gets read and talked about by more people.

In this book four friends, (a White man and three Black women) pick four of Toni Morrison’s books namely, Beloved, The Bluest Eye, Song of Solomon and A Mercy and talk about how Morrison’s words spoke to them through various life experiences, be it the good, bad or ugly. In their individual essays they examine African American history, contemplate current events and compare the two, asses the similarities, ponder over the changes, while also simultaneously taking into account Morrison’s impactful words, wishing and thinking, that if only more people read her books, understood and talked about the difficult, uncomfortable and important things she wrote about, maybe, maybe our world would have been less troubled.

The Toni Morrison Book Club also sheds light on several cultural tropes and racist terms, and on why they are wrong and why micro-aggression shouldn’t be confused for compliment. Examples include – “strong Black girl”, “exotic beauty”, “Black sass/aggression”, “Can I touch your pretty textured hair” and many more. As a reader, we gain plenty of perspective on the relevance of Morrison’s words in our present society. It’s also terrifying to realize that a considerable number of horrors portrayed in her books are still prevalent, certainly overlooked and glossed over but present nonetheless. Slavery might be illegal but not every person is truly free in the twenty first century.

Despite this being a non fiction, it is an excellent example of why fiction is paramount in our lives. The feeling of being wholly understood after reading something in a book is unparalleled and it makes the reader both bold and vulnerable. In The Toni Morrison Book Club, its four writers have bared out their souls, writing about uncomfortable intimate things, things they haven’t spoken aloud in years, but in here, having acquired the courage to do so after reading and being inspired by Morrison’s words.

Really, I learned a huge deal from this short 200 something page book and now am also motivated to read my first Morrison. And although I listened to this on audio, (highly recommended), I also plan on getting myself a physical copy in order to highlight and reread because along with everything, this is an extremely quotable book as well.

Just read this, even if you don’t read memoirs or nonfiction because there is plenty to gain and learn from its contents.

Disclaimer: A free ALC was provided by LibroFM in exchange for an honest review. All opinions are my own.

I Should Have Honor: A Memoir of Hope...