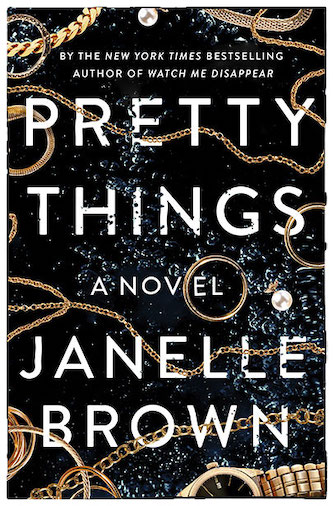 Two wildly different women–one a grifter, the other an heiress–are brought together by the scam of a lifetime in a page-turner from the New York Times bestselling author of Watch Me Disappear.

Nina once bought into the idea that her fancy liberal arts degree would lead to a fulfilling career. When that dream crashed, she turned to stealing from rich kids in L.A. alongside her wily Irish boyfriend, Lachlan. Nina learned from the best: Her mother was the original con artist, hustling to give her daughter a decent childhood despite their wayward life. But when her mom gets sick, Nina puts everything on the line to help her, even if it means running her most audacious, dangerous scam yet.

Vanessa is a privileged young heiress who wanted to make her mark in the world. Instead she becomes an Instagram influencer–traveling the globe, receiving free clothes and products, and posing for pictures in exotic locales. But behind the covetable façade is a life marked by tragedy. After a broken engagement, Vanessa retreats to her family’s sprawling mountain estate, Stonehaven: A mansion of dark secrets not just from Vanessa’s past, but from that of a lost and troubled girl named Nina.

Nina, Vanessa, and Lachlan’s paths collide here, on the cold shores of Lake Tahoe, where their intertwined lives give way to a winter of aspiration and desire, duplicity and revenge.

This dazzling, twisty, mesmerizing novel showcases acclaimed author Janelle Brown at her best, as two brilliant, damaged women try to survive the greatest game of deceit and destruction they will ever play.

Nothing is ever as pure as it seems at first glance; there is always something more complicated to be found when you peel back the unmarred surface of pretty things.

If you’ve read its premise you might be misled into thinking that this is an action packed heist thriller involving the scam of a lifetime. Well, it’s not. Yes, a scam is involved but it’s not the one you’re expecting. And I wouldn’t really put it in the thriller category, it’s more like a literary mystery.

The enticing cover caught my attention at first, but after reading the exquisitely written prologue I was instantly pulled into the story and found myself turning pages until the very end. Almost 500 pages of delicious nonstop entertainment with the most unexpected conclusion.

The plot naturally is extremely fascinating – a broke grifter, a lonely Instagram influencer, and a master con artist are all brought together at the picturesque setting of Lake Tahoe. A sprawling old mansion nearly overflowing with precious antiques is the common denominator. There are gripping backstories that reveal complex and messy history between the characters involving lost dreams and forbidden first loves, dysfunctional family dynamics and plenty of mind games. A few clever twists are placed aptly within the story, most of which I did not see coming.

Caption-and-comment culture in all its brevity leaves out the middle ground, where most of life is found.

Additionally, in between we get some thought provoking and compelling commentary on social media, disparity between the glamorous online life and the ordinary real one, the gaping vast gap between the exorbitantly wealthy and those struggling to barely meet ends. Some reviewers have complained about its length and lack of action, but frankly non of it bothered me and I savored every moment of this beautifully written smart story.

It’s easiest to judge from a distance. That’s why the Internet has turned us all into armchair critics, experts at the cold dissection of gesture and syllable, sneering self-righteously from the safety of our screens. There, we can feel good about ourselves, validated that our flaws aren’t as bad as theirs, unchallenged in our superiority.

Did you know Nicole Kidman is to star and produce a series adaptation of this for Amazon? I cannot wait!

Recommended if you enjoy character driven literary suspense brimming with deceit and betrayal that makes you second guess everyone and everything.  Also, if you like listening to audiobooks, this one is excellently narrated by Julia Whelan, Lauren Fortgang & Hillary Huber.

Disclaimer: A free ebook and audiobook was provided by Random House and Libro.fm in exchange for an honest review. All opinions are my own.