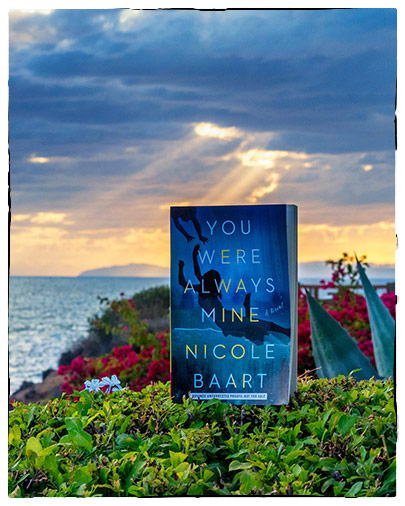 Jessica Chamberlain, newly separated and living with her two sons in a small Iowa town, can’t believe that a tragedy in another state could have anything to do with her. But when her phone rings one quiet morning, her world is shattered. As she tries to pick up the pieces and make sense of what went wrong, Jess begins to realize that a tragic death is just the beginning. Soon she is caught in a web of lies and half-truths—and she’s horrified to learn that everything leads back to her seven-year-old adopted son, Gabriel.

Years ago, Gabe’s birth mother requested a closed adoption and Jessica was more than happy to comply. But when her house is broken into and she discovers a clue that suggests her estranged husband was in close contact with Gabe’s biological mother, she vows to uncover the truth at any cost. A harrowing story of tenacious love and heartbreaking betrayal, You Were Always Mine is about the wars we wage to keep the ones we love close, perfect for fans of Liane Moriarty and Jodi Picoult.

How often does it happen that you read a book that is a gripping page turner along with having an emotional punch to it? I am guessing not very frequently. It’s not everyday that you get to read a story that’ll both pull on your heartstrings and have enough suspense to keep you on the edge of your seat. Let me start by saying that is not an average psychological thriller with an unforeseeable twist happening every other chapter, nor does this entirely belong in the category of women’s fiction where everything is mostly evident and largely the emotions are at play. You Were Always Mine by Nicole Baart is an amalgamation of these two genres, a suspenseful domestic drama that’ll satisfy its reader with an excellent mystery, but also leave a lot to be pondered on.

The story follows Jessica Chamberlain, an Iowa resident and high school teacher, who lives with her two sons and has recently separated from her husband Evan. In spite of their differences, Jessica is still very much in love with her husband, and believes that Evan’ll come back to her eventually and they’ll be a happy family again. One day on a crisp October morning, she receives a phone call about an unfortunate accident in one of Minnesota’s hunting grounds. Jessica doesn’t believe this has anything do with her and almost dismisses it as a mistake, because she doesn’t know anyone in Minnesota.  What she also doesn’t know is that her carefully constructed life is about to come crashing down due this tragedy across another state.Everything she has known is about to change. The chain of events that follow this unexpected phone call is only the beginning of the harrowing experience she’s about to face. What’s most devastating is the realization that her six year old adopted son, Gabe is at the center of it all.

The mystery portion of this story is pretty smartly done. I was entirely clueless about those tiny snippets of clues that the author kept dropping in between. It was only after everything got wrapped up that my mind could comprehend the intelligent placing of those facts and figures. Like I mentioned, this is not your average twisty psychological thriller, but rather a slow-burn emotional domestic drama that encompasses secrets, betrayals, complexity of relationships and a mother’s unending love for her child.

The primary theme of this story focuses on the darker side of adoption, and also on the vulnerabilities faced by adoptive parents. Nicole Baart has done a commendable job with the writing and characterization. The portrayal of Jessica’s insecurities and struggles provide a glimpse into the grief and frustration faced by an adoptive parent who love their adoptive children just as fiercely as their biological ones. I was not surprised to know that Baart herself is an adoptive parent. No wonder, her voice feels so real, no wonder all the facts in here are so well researched.

I believe we really need more of these thought-provoking stories that are compulsively readable and have a strong message to them, stories that make us uncomfortable and yet force us to think about important topics like these.

Disclaimer: An ARC was provided by Atria Books and TLC Book Tours in exchange for an honest review. All opinions are my own.

Thanks for being on the tour!