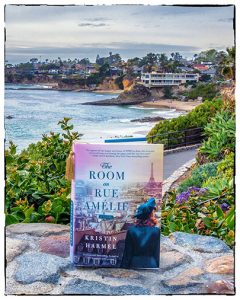 When newlywed Ruby Henderson Benoit arrives in Paris in 1939 with her French husband Marcel, she imagines strolling arm in arm along the grand boulevards, awash in the golden afternoon light. But war is looming on the horizon, and as France falls to the Nazis, her marriage begins to splinter, too.

Charlotte Dacher is eleven when the Germans roll into the French capital, their sinister swastika flags snapping in the breeze. After the Jewish restrictions take effect and Jews are ordered to wear the yellow star, Charlotte can’t imagine things getting much worse. But then the mass deportations begin, and her life is ripped forever apart.

Thomas Clarke joins the British Royal Air Force to protect his country, but when his beloved mother dies in a German bombing during the waning days of the Blitz, he wonders if he’s really making a difference. Then he finds himself in Paris, in the shadow of the Eiffel Tower, and he discovers a new reason to keep fighting—and an unexpected road home.

When fate brings them together, Ruby, Charlotte, and Thomas must summon the courage to defy the Nazis—and to open their own broken hearts—as they fight to survive. Rich with historical drama and emotional depth, this is an unforgettable story that will stay with you long after the final page is turned.

The Room on Rue Amélie by Kristin Harmel is a heartbreaking and inspiring tale of love, loss and survival during the tumultuous times of World War II.

That’s one thing faith is especially good for: giving us strength in times of crisis

I have always found stories based during this era of time to be extremely emotional. I think the one thing they all have in common is how we get to see the best and the worst of humanity simultaneously. Its distressing to just read about the horrors inflicted on humans during that turbulent era, and yet it is also comforting to know that even amidst those dark times, kindness and compassion was not lost.

The Room on Rue Amélie tells the story of Ruby, an American in Paris; Charlotte, an eleven year old Jewish girl and Thomas, a British RAF pilot, and how their lives get interlaced with each other. I believe Kristin Harmel has beautifully captured that bleak age and put into words the fears, hopes and dreams of these three very different characters. It could be majorly classified as a romance, but I believe it is so much more than just that.

Perhaps that was what it was like to love someone deeply; to feel that no matter how many moments together you were granted, there would never be enough

I don’t want to say much about the story, what you read in the blurb is sufficient, just know this, that in the midst of all the gloom and oppression, towards the end, it reprises the goodness of mankind, strength of faith and the enduring power of love. There is danger, drama and a depth of feeling that’ll stay with its readers.

To all historical fiction and romance readers, I’d definitely recommend this.

Discalimer: I was sent a free finished copy of this book by Gallery Books. All opinions are my own.