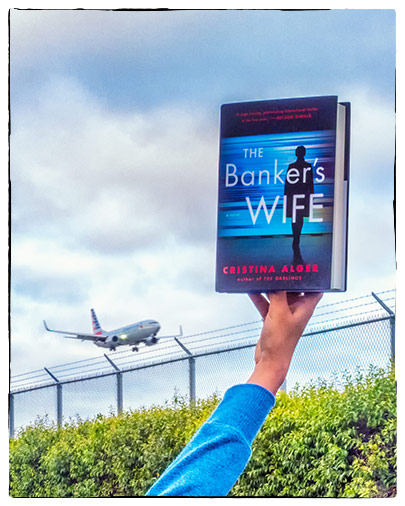 On an early morning in November, a couple boards a private plane bound for Geneva, flying into a storm. Soon after, it simply drops off the radar, and its wreckage is later uncovered in the Alps. Among the disappeared is Matthew Lerner, a banking insider at Swiss United, a powerful offshore bank. His young widow, Annabel, is left grappling with the secrets he left behind, including an encrypted laptop and a shady client list. As she begins a desperate search for answers, she determines that Matthew’s death was no accident, and that she is now in the crosshairs of his powerful enemies.

Meanwhile, ambitious society journalist Marina Tourneau has finally landed at the top. Now that she’s engaged to Grant Ellis, she will stop writing about powerful families and finally be a part of one. Her entry into the upper echelons of New York’s social scene is more appealing than any article could ever be, but, after the death of her mentor, she agrees to dig into one more story. While looking into Swiss United, Marina uncovers information that implicates some of the most powerful men in the financial world, including some who are too close to home. The story could also be the answer to Annabel’s heartbreaking search—if Marina chooses to publish it.

The Banker’s Wife by Cristina Alger is a brisk financial thriller. Set globally, it revolves around dirty money, hidden offshore accounts, power hungry politicians and corrupt, ultra rich bankers. From Paris to New York and Geneva to London, this slick and smart international page turner held my full attention from start to finish.

This is how the adventure begins: On a cold snowy morning in November, at an airport in London, a private jet bound for Geneva takes off into the storm and before long drops off the radar, simply vanishing over the alps. After further investigation, a wreckage is found up the mountains with no survivors and the crash is labeled as yet another unfortunate weather related accident.

One of the passengers aboard was Matthew Werner, a banker with Swiss United, a powerful offshore bank in Geneva. When officials come knocking at his house, bearing the tragic news, his widow Annabel Werner is devastated but also confused, because from what she knew, her husband was in Zurich, not London. Soon after, Annabel finds herself entangled in a dangerous and complicated web of secrets left behind by her husband. And as she digs deeper, she realizes her husband’s accident was not just that, and she might end up the same if she’s not careful.

At the other end of the world in New York is Marina Tourneau, an ambitious society journalist, recently engaged to Grant Ellis, a budding businessman and son of USA’s next presidential candidate. Marina had to cut short her Paris trip due to the sudden and mysterious murder of her boss and mentor, Duncan Sanders. They’d unofficially been working on a high profile case involving illegal money stashing with offshore banks. Marina is determined to find her boss’s killers and uncover the global scam they’d been working on together. But as she looks for answers, she’s not ready for the secrets she uncovers and is absolutely stunned by the information unearthed that could easily bring down some of the most influential people in the world.

The two parallel story lines gradually connect as the overall mystery is unveiled. Throughout the book the tension never slacks, plot twists keep coming and readers are left guessing until the very end. I was very impressed with the expertly crafted strong female characterization in this male dominated financial world. Also worth a mention is the ease and expertise with which the author explains the finer details of banking and finance, clarifying the basics without making it sound complicated or boring.

There is a final unexpected twist towards the end but I was completely satisfied with how everything wrapped up. The conclusion was slightly movie-ish but no complaints. On that note this story can in fact be made into an excellent movie. Might I also mention that there are barely any bloody gory details in here, of which I am barely a fan, so yet another positive.

So, in conclusion The Banker’s Wife is an intriguing and tense read full of secrets and betrayal and fraught with tension. It should certainly be on your radar if you enjoy a good thriller.

Disclaimer: A free finished copy was provided by Putnam Books. I was under no obligation to write a review. All opinions are my own.

Great review! Glad you enjoyed it 🙂

Thank you so much Evelina 🙂

This sounds like a fantastic thriller and I am glad you enjoyed this. Adding this to my TBR, though I rarely read thrillers, but you convinced me 😛

Yay! I seriously loved this one, and hope you enjoy it too 😁 I wish it gets made into a movie, so that I have yet another excuse to say, the book was better 😛