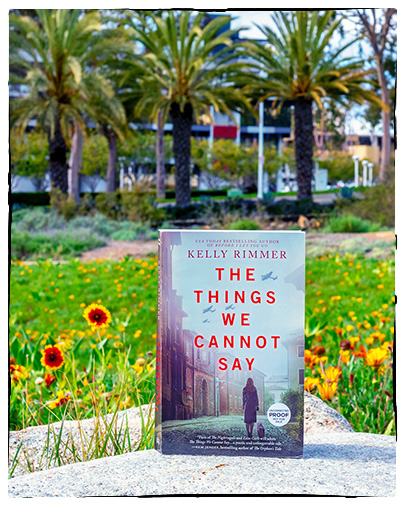 In 1942, Europe remains in the relentless grip of war. Just beyond the tents of the Russian refugee camp she calls home, a young woman speaks her wedding vows. It’s a decision that will alter her destiny, and it’s a lie that will remain buried until the next century.

Since she was nine years old, Alina Dziak knew she would marry her best friend, Tomasz. Now fifteen and engaged, Alina is unconcerned by reports of Nazi soldiers at the Polish border, believing her neighbors that they pose no real threat, and dreams instead of the day Tomasz returns from college in Warsaw so they can be married. But little by little, injustice by brutal injustice, the Nazi occupation takes hold, and Alina’s tiny rural village, its families, are divided by fear and hate. Then, as the fabric of their lives is slowly picked apart, Tomasz disappears. Where Alina used to measure time between visits from her beloved, now she measures the spaces between hope and despair, waiting for word from Tomasz and avoiding the attentions of the soldiers who patrol her parents’ farm. But for now, even deafening silence is preferable to grief.

Slipping between Nazi-occupied Poland and the frenetic pace of modern life, Kelly Rimmer creates an emotional and finely wrought narrative that weaves together two women’s stories into a tapestry of perseverance, loyalty, love and honor. The Things We Cannot Say is an unshakable reminder of the devastation when truth is silenced…and how it can take a lifetime to find our voice before we learn to trust it.

Life has a way of reminding you that you are at the mercy of chance, and that even well-thought-out plans can turn to chaos in an instant.

The Things We Cannot Say by Kelly Rimmer is easily going to be one of my favorite books of this year, possibly one I’ll keep recommending to people for a very long time. Historical fiction, particularly those centered around and impacted by the atrocities of war are often times desperately tragic and distressing. But it’s the little acts of bravery and kindness during these despairing times that keep our faith in humanity alive. Likewise, this story is heartbreaking yet uplifting, a complete tear jerker that’ll effortlessly rip out its reader’s heart, but despite all its woefulness the hope and heart in here would also leave its reader entirely fulfilled.

Narrated in first person by two women, the story alternates between present day United States and early 1940s Poland. Alina Dziak is fifteen years old and engaged to her best friend Tomasz. Madly in love with her finace, she is counting days until he gets back from college and they can get married. Her young mind pays no heed to reports of Nazi soldiers at the Polish border, until the occupation becomes a reality and everything Alina has known changes for the worse. Her brothers get sent to camp, the Nazis now control the family farm and produce, they get a meagre ration in the name of food and freedom is lost. To make things worst, there’s no news of Tomasz. Through Alina’s narrative we get a close look on the horrors and hardships of war – the hunger, the fear the uncertainty, the anger and desperation.

Jumping over to present day, we see Alice, a young mother struggling to find balance between managing two very different children, an extremely gifted daughter and a son on the Autistic spectrum. Her husband Wade is entirely devoted to office work with barely any time to spare for his family, leaving Alice to juggle everything all by herself. When her grandmother suffers a stroke and is admitted to hospital, she unexpectedly requests Alice to make a trip to her former home in Poland. Alice finds herself conflicted and on crossroads due to this sudden demand. While she absolutely cannot let her Babscia down, she also realizes her family won’t be able to function for a single day in her absence. Through Alice’s narrative we get a glimpse into complexities within a family, intricacies of marriage, and the tiny troubles and triumphs of parenting.

Kelly Rimmer has a unique way with words. Her writing is simple, almost conversational but she somehow manages to transport her readers to another time and place, making them experience every emotion her characters are going through. I was really impressed with how different yet genuine the two narratives of Alina and Alice were. They were both strong and courageous women yet distinct in their own way. Not once did it feel like the different narratives were overlapping. The mystery of how the two stories connected was smoothly and fluidly unveiled. I had an inkling on how things might wrap up, and despite having guessed a couple of things, not for a single moment did I feel like the story was getting dragged. It all wrapped up perfectly.

The author pays great attention to tiny details, be it the Polish conditions during the Nazi occupation or the nuances and challenges of raising children with special needs, be it a gifted or an autistic one. It is apparent that extensive research was put in, to get everything right in both time periods. Also, worthy of mention is the well thought out book’s title, after I finished reading, I realized there couldn’t be a more fitting name for this complicated, immersive and emotional story of love and loyalty, perseverance and survival. I was thoroughly invested in every aspect in both the timelines and kept turning pages. I don’t remember recently having finished an almost 450 page book in less than two days.

Like I mentioned, I’ll keep recommending this beautiful story to everyone. So, buy it or borrow it, just read it and I promise, you won’t be disappointed.

Life has a way of shattering our expectations, of leaving our hopes in pieces without explanation. But when there’s love in a family, the fragments left behind from our shattered dreams can always be pulled together again, even if the end result is a mosaic.

Disclaimer: An ARC was provided by Graydon House and TLC Book Tours in exchange for an honest review. All opinions are my own.

I am so glad you enjoyed this one so much! Thank you for being on this tour!