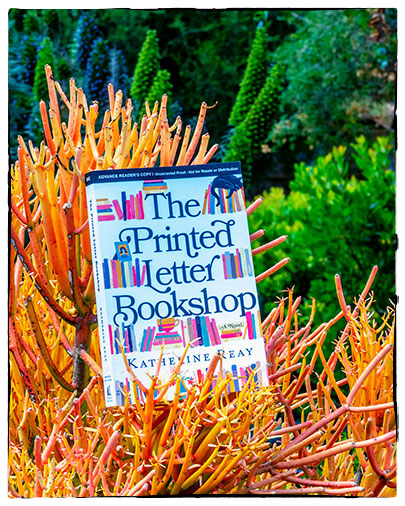 One of Madeline Cullen’s happiest childhood memories is of working with her Aunt Maddie in the quaint and cozy Printed Letter Bookshop. But by the time Madeline inherits the shop nearly twenty years later, family troubles and her own bitter losses have hardened Madeline’s heart toward her once-treasured aunt—and the now struggling bookshop left in her care.

While Madeline intends to sell the shop as quickly as possible, the Printed Letter’s two employees have other ideas. Reeling from a recent divorce, Janet finds sanctuary within the books and within the decadent window displays she creates. Claire, though quieter than the acerbic Janet, feels equally drawn to the daily rhythms of the shop and its loyal clientele, finding a renewed purpose within its walls. When Madeline’s professional life takes an unexpected turn, and when a handsome gardener upends all her preconceived notions, she questions her plans and her heart. She begins to envision a new path for herself and for her aunt’s beloved shop—provided the women’s best combined efforts are not too little, too late.

The Printed Letter Bookshop is a captivating story of good books, a testament to the beauty of new beginnings, and a sweet reminder of the power of friendship.

As a self proclaimed book lover, I am stating the obvious when I say I love books, but what I like even more is reading books about books and bookshops. The Printed Letter Bookshop by Katherine Reay is delightful story about books and a bookshop also encompassing hope, friendship, forgiveness and second chances. It’s about finding joy in things we love, letting go of the past and embracing life’s uncertainty.

At the heart of the story is a quaint small-town independent bookshop – The Printed Letter, that Madeline Cullen inherits from her aunt. A successful Chicago lawyer and about to be made partner at her current firm, Madeline does not have the time or inclination to continue running the barely thriving bookshop. In fact, the inheritance came as a shock to her. Almost two decades back, after an unfortunate turn of events strained her dad’s relationship with his sister, Madeline cut off ties too with her once-beloved aunt. But then why was her dad so full of regret at her aunt’s funeral? Did she make a mistake without knowing the whole story? How will she find out what actually happened all those years ago, when no one wants to talk about it?

While Madeline is struggling with her thoughts about her aunt and the bookshop, several miles away across town, two women, Janet and Claire are also wondering about The Printed Letter Bookshop’s fate. Janet is a fifty something recent divorcee, and one of the two employees at the the bookshop. She lost her closest friend and confidante with Maddie’s death. Both her kids keep her at an arm’s length siding with their father since after the divorce. Maddie’s death has been hard on her and she desperately wants to save the shop and thereby her friend’s lifework and legacy.

Claire, the other employee has recently moved to town and feels like she’s still settling in. The Printed Letter is the only place that makes her happy, she likes being in control and now with the uncertainty associated with the shop, she feels all control slipping out. After all, what is it that she can do?

The The Printed Letter Bookshop is what brings these three women together, and as they get to know and help each other, a strong bond of friendship forms between them, Madeline’s aunt Maddie being the common thread. Days turn into weeks and the goal of getting the shop ready to be sold transforms into saving the shop. Alongside we also see the transformations occurring in the lives of the three women. This story isn’t plot elaborate but rather character oriented. Over its course we see, every character growing in their own way towards overcoming fears, accepting the whims of fate and letting go of what one can’t control.

One thing that particularly delighted me about this book was the innumerable quotes and bookish references throughout. I had so much fun trying to figure out which books were being referenced. The author thoughtfully lists all of the books mentioned directly/indirectly in the story towards the end. After having finished reading this, I spent another hour browsing about the books I hadn’t heard of, and adding a bunch of books to my TBR. How often does that happen!

A cozy, charming read, The Printed Letter Bookshop by Katherine Reay is an ode to independent bookshops and book lovers and I’ll recommend this if you’re looking for an endearing, feel-good story to curl up with. I am definitely going to keep an eye out for the author’s future releases and meanwhile will be checking out her previous works.

Disclaimer: An ARC was provided by Thomas Nelson and TLC Book Tours in exchange for an honest review. All opinions are my own.

I also am a sucker for a book that is at all related to books. I actually could probably fill a shelf with such books. Maybe I should!! Ha! Thanks for being on this tour! Sara @ TLC Book Tours