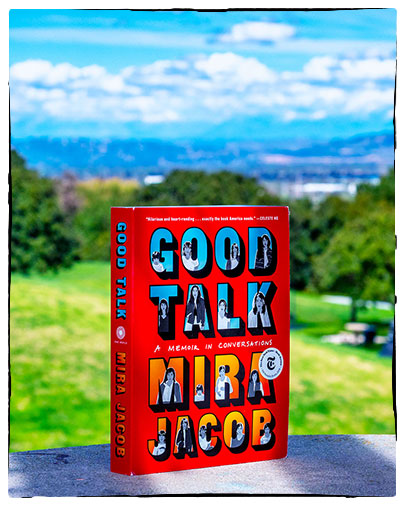 Mira Jacob’s touching, often humorous, and utterly unique graphic memoir takes readers on her journey as a first-generation American. At an increasingly fraught time for immigrants and their families, Good Talk delves into the difficult conversations about race, sex, love, and family that seem to be unavoidable these days.

Inspired by her popular BuzzFeed piece “37 Difficult Questions from My Mixed-Raced Son,” here are Jacob’s responses to her six-year-old, Zakir, who asks if the new president hates brown boys like him; uncomfortable relationship advice from her parents, who came to the United States from India one month into their arranged marriage; and the imaginary therapy sessions she has with celebrities from Bill Murray to Madonna. Jacob also investigates her own past, from her memories of being the only non-white fifth grader to win a Daughters of the American Revolution essay contest to how it felt to be a brown-skinned New Yorker on 9/11. As earnest and moving as they are sometimes laugh-out-loud funny, these are the stories that have formed one American life.

Brutally honest and thought provoking, deeply poignant yet surprisingly humorous, Good Talk: A Memoir in Conversations by Mira Jacob is one of the best books I’ve read this year and it has found its way into my list of favorites. In case you need a little background, Mira Jacob is an American, her parents are Indian immigrants, she married a Jewish man and they have a mixed race son Zakir, here referred to as Z. This is her memoir.

Good Talk is exactly what the title claims, that is, good rather excellent talk and a memoir in conversations. The book begins with Mira reasoning with Z over his obsession with Michael Jackson while simultaneously trying to answer his seemingly innocent but deeply relevant questions on race and skin color and later on the political environment post 9/11 up until Trump’s election as President of the United States.

Mira takes us all the way back to the story of her parent’s arranged marriage in India, their trip to USA and the adjustments that came with it. She talks about her experience of being a brown girl in America, her utter confusion on being deemed ugly in India because of her dark skin, her baffling dating experience and the indirect racism she has encountered and also the various discriminations she has faced at work. There are conversations on how worried her parents got after realizing that she probably won’t marry an Indian, or even an Indian American, and more on how her Jewish in-laws to be would also have preferred her to be Jewish.

We think our hearts break only from endings—the love gone, the rooms empty, the future unhappening as we stand ready to step into it—but what about how they can shatter in the face of what is possible?

One very upsetting and frustrating conversation is when she tries explaining to Z why his paternal grandparents are Trump supporters. Mira can be seen struggling, because really how can one justify all of those obvious racist undertones in Trump’s campaign to a young kid! And then there was also that one incident where she was mistaken as the help at a party at her in-laws place.

Also, this isn’t a traditional graphic novel, as in real pictures are superimposed with artwork and the same faces are used repeatedly, but in my opinion it’s a rather creative take on a graphic novel and works wonderfully with the content.

Good Talk is messy and complex, it is tender and honest to a fault, extremely satirical and particularly witty at times, but at the end of it all it is completely, desperately human. It’s one woman’s story about love and belonging and trying to find her place in a beautifully complicated world, while also attempting to honestly answer the multitude of questions asked by her inquisitive young son.

Trust me when I say this book is sheer brilliance, one that I’ll be recommending and gifting frequently. I am pretty sure POC readers, especially those residing in US will find much to relate. A lot of what bothers Mira as a mother, bothers me too, and there are lines in here that I can literally quote as my feelings for my son, who is also going to grow up as a brown man in America.

If I had to pick my favorite lines from this book, they would certainly be these –

Even now, just writing that down, I want to say something that will make it okay, or even make it make sense, but I can’t.

And this is maybe the part I worry about the most, how the weight of that will twist you into someone you don’t want to be, or worse, make you ashamed of your own heart. I hope you will remember that you have nothing to be ashamed of. I hope you will remember that your heart is a good one, and that your capacity to feel love, in all its complexity, is a gift.

I’ve also read that this book is to be developed into a TV series and cannot wait for it. Again, if you haven’t read this yet, please do, it’s a masterpiece, and I highly recommend it.

Disclaimer: A free finished copy was provided by Random House. All opinions are my own.

I Should Have Honor: A Memoir of Hope...