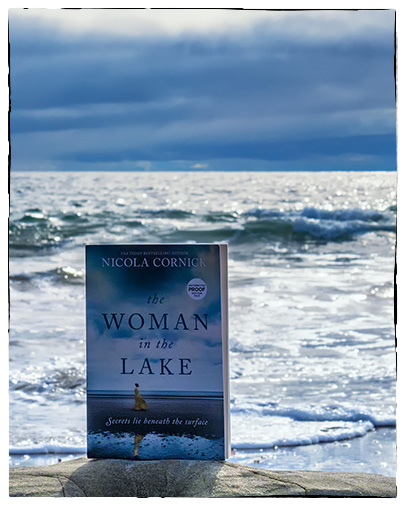 London, 1765
Lady Isabella Gerard, a respectable member of Georgian society, orders her maid to take her new golden gown and destroy it, its shimmering beauty tainted by the actions of her brutal husband the night before. Three months later, Lord Gerard stands at the shoreline of the lake, looking down at a woman wearing the golden gown. As the body slowly rolls over to reveal her face, it’s clear this was not his intended victim.

250 Years Later
When a gown she stole from a historic home as a child is mysteriously returned to Fenella Brightwell, it begins to possess her in exactly the same way that it did as a girl. Soon the fragile new life Fen has created for herself away from her abusive ex-husband is threatened at its foundations by the gown’s power over her until she can’t tell what is real and what is imaginary. As Fen uncovers more about the gown and Isabella’s story, she begins to see the parallels with her own life. When each piece of history is revealed, the gown—and its past—seems to possess her more and more, culminating in a dramatic revelation set to destroy her sanity.

Historical fiction is one of my favorite genres, and if it involves a dual timeline story where fates of characters are connected by decisions and actions taken centuries apart, it makes for a recipe I absolutely adore. Mix in some fantasy and chances are I’d love it even more. Last year when I read The Phantom Tree by Nicola Cornick it easily became one of my favorites since in addition to gorgeous writing, it included everything I love in historical fiction. So, just imagine my excitement when I realized the author was releasing another novel! I couldn’t wait to get a copy, and almost did a happy dance when my ARC for The Woman in the Lake arrived in the mail.

Set in the dual timelines of present day Swindon and Georgian London, The Woman in the Lake is a story that revolves around three women and an evil gorgeous golden gown. Lady Isabella Gerard has a love-hate relationship with a stunning new gown, an unexpected gift by her unloving, abusive husband. She orders her maid Constance to take away the shimmering beauty until she asks for it again. Constance, who is also a spy for Lord Gerard, is torn between the two conflicting orders of destroying the gown, as per the master’s order or preserving it until further notice, as decreed by the mistress. What will she do? Who can she defy? And what’s so special about this gown other than its obvious beauty?

Fast forward two and a half centuries to present day. Teacher and part time antique seller, Fenella Brightwell has just about managed to settle into her new life after escaping and divorcing her manipulative abusive ex. One day she arrives home to a mysterious package, opening which reveals a gorgeous golden gown that Fenella recalls stealing as a child from a historic home on a school trip. With the gown now in her possession, Fen starts experiencing weird hallucinations and strange urges. Is the gown controlling her or is she just losing her mind? As she struggles to find sanity and tries to unearth the mystery surrounding the bizarre occurrences, Fen comes across Lady Isabella’s story and finds herself entangled in a convoluted puzzle that spans centuries.

The overall plot is well designed and mystery expertly woven around historical facts and events. Manipulations, deceit, revenge – there is plenty of psychological darkness involved, along with a slight gothic element which maintains a constant menacing undertone throughout the story. However, despite it all, I wasn’t as impressed as I wanted to be with The Woman in the Lake. Having read The Phantom Tree before, I knew the author was capable of weaving intricate, elaborate dual stories that just melded into each other. Sadly, that wasn’t the case with this one, the execution of the plot as well as the ending seemed pretty rushed. The pacing was slow, the characters felt flat and lacked complexity,  and speaking of characters, I believe there were too many of them, which only made things more confusing rather than clear.

I really, really wanted to like this book, but it felt like everything was just haphazardly put together. So much was left unexplained – the time travel aspect – how did that really work? The gown – was it really evil? If yes, how did that happen, if no, why did it affect anyone who touched it? What fate befell Lord Gerard? For such an intriguing premise, a lot made very little sense. Also, that wisp of romance in the present day was barely convincing. And tell me, how did that certain someone find Fen towards the end (Don’t want to give spoilers, hence the vagueness). I am not saying this was a bad book, it just could have been so much better.

You’ll have to read it for yourself to know how it sits with you. I’d highly recommend the author’s last book The Phantom Tree, but about this one, I am not so sure. Of course, I’ll still be on the lookout for her next work, but am sorry that this one didn’t manage to impress me.

Disclaimer: An ARC was provided by Harlequin Books and TLC Book Tours in exchange for an honest review. All opinions are my own.

I can definitely see why this left you with unanswered questions. I have it on my to-read list because it sounds so different than anything else I’ve read so I’m giving it a shot! Thanks for being on this tour!