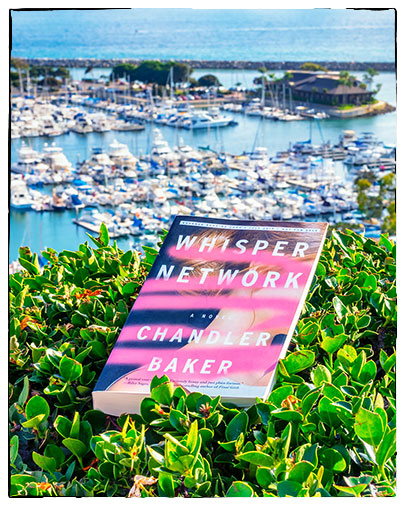 Four women learn their boss (a man who’s always been surrounded by rumors about how he treats women) is next in line to be CEO—what will happen when they decide enough is enough?

Sloane, Ardie, Grace, and Rosalita are four women who have worked at Truviv, Inc., for years. The sudden death of Truviv’s CEO means their boss, Ames, will likely take over the entire company. Ames is a complicated man, a man they’ve all known for a long time, a man who’s always been surrounded by…whispers. Whispers that have always been ignored by those in charge. But the world has changed, and the women are watching Ames’s latest promotion differently. This time, they’ve decided enough is enough.

Sloane and her colleagues set in motion a catastrophic shift within every floor and department of the Truviv offices. All four women’s lives—as women, colleagues, mothers, wives, friends, even adversaries—will change dramatically as a result.

Whisper Network by Chandler Baker is a relevant and timely novel that addresses multiple social issues primarily focusing on corporate politics, struggles of being a working woman in a male dominated world and how rumors even those innocuous little ones can prove to be lethal.

The story is set in the legal department at Truviv Inc., a Fortune 100 company based in Dallas, Texas and revolves around four women lawyers gregarious Sloane Glover, poised Ardie Valdez, rational Grace Stanton and a fresh new-hire Katherine Bell. After the unfortunate sudden death of their company’s CEO, there are whispers circulating through the office that Ames Garrett, the General Counsel might get promoted to occupy the recently vacated top position. Everyone knows he’s arrogant and ruthless. But there’ve also been other whispers about Ames, particularly about how he emotionally manipulates women who work with/under him.

But for Sloane Grover it’s not just a whisper, she knows this for a fact and in spite of being extremely adept at her job, she has suffered professionally due to an early affair with Ames. When the new girl Katherine confesses about Ames’ inappropriate behavior, Sloane can’t just sit by and watch him become the next CEO. She is determined to expose him for what he really is. As a first step she adds his name to an anonymous spreadsheet circulating within the city named BAD Men List, aka “Beware of Asshole Dallas Men,” that lists male names and their respective wrongdoings. What follows is a shocking chain of events that includes another death (possibly murder!), a lawsuit, and an almost media uproar.

This is a well crafted and interesting whodunit. The author masterfully blends thriller elements with a plethora of social issues like discrimination at work, unrealistic expectations of perfection from women, challenges of new motherhood, entitlement, exploitation and a lot more. There’s also plenty on female friendship, how women support each other and how usually they emerge stronger and better after facing the callous corporate culture, but how sometimes they also get frustrated and depressed.

But it has a few shortcomings as well that I’d like to pinpoint. First, the writing style felt a bit queer. I later realized that the narration is third person by women in general and not by a specific character, and this felt rather odd and confusing at times. It hence took me a while to get into the storytelling and the story as well because the first half of the book is painfully slow and boring! And yet, the second half and particularly how everything wrapped up towards the end won me over completely and I was satisfied with what I read.

On the whole this story is a combination of suspense and women’s fiction that both entertains and educates. However, if you start with this and want to put it down, I’ll encourage you to keep pushing because the end will be totally worth dragging through the first half of the book.

Disclaimer: A free paperback ARC was provided by Macmillan in exchange for an honest review. All opinions are my own.

The Summer of Sunshine and Margot – Book Review