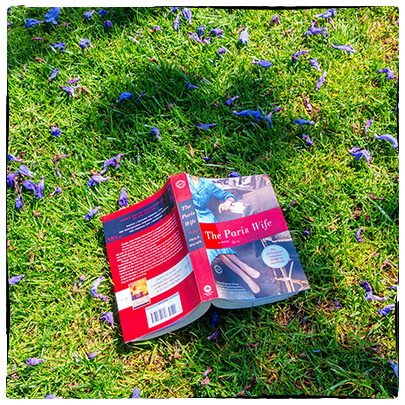 A deeply evocative story of ambition and betrayal, The Paris Wife captures a remarkable period of time and a love affair between two unforgettable people: Ernest Hemingway and his wife Hadley.

Chicago, 1920: Hadley Richardson is a quiet twenty-eight-year-old who has all but given up on love and happiness—until she meets Ernest Hemingway and her life changes forever. Following a whirlwind courtship and wedding, the pair set sail for Paris, where they become the golden couple in a lively and volatile group—the fabled “Lost Generation”—that includes Gertrude Stein, Ezra Pound, and F. Scott and Zelda Fitzgerald.

Though deeply in love, the Hemingways are ill prepared for the hard-drinking and fast-living life of Jazz Age Paris, which hardly values traditional notions of family and monogamy. Surrounded by beautiful women and competing egos, Ernest struggles to find the voice that will earn him a place in history, pouring all the richness and intensity of his life with Hadley and their circle of friends into the novel that will become The Sun Also Rises. Hadley, meanwhile, strives to hold on to her sense of self as the demands of life with Ernest grow costly and her roles as wife, friend, and muse become more challenging. Despite their extraordinary bond, they eventually find themselves facing the ultimate crisis of their marriage—a deception that will lead to the unraveling of everything they’ve fought so hard for.

A heartbreaking portrayal of love and torn loyalty, The Paris Wife is all the more poignant because we know that, in the end, Hemingway wrote that he would rather have died than fallen in love with anyone but Hadley.

There is a charm to historical fiction that always fills me with awe. One of the few ways to experience an era that once was, is to read about it. And when the prose is as beautiful as this, its almost like experiencing it all.

Maybe happiness was an hourglass already running out, the grains tipping, sifting past each other. Maybe it was a state of mind.

Although a work of fiction, The Paris Wife is deeply inspired by the true life story of Ernest Hemingway and his first wife Hadley Richardson. Narrated from Hadley’s point of view, this is a completely different take on what it was like to live in the dazzling, glittering Jazz age of Paris and be amidst the now popular and then rising artists like Ernst Hemingway, Gertrude Stein, Ezra Pound, F. Scott and Zelda Fitzgerald and many more.

The Paris Wife explores both the characters of Hemingway and Hadley along with the relationship they shared at a deeper, much complex level. Its a powerful and provocative tale. It includes the heartbreaking and intimate details on how two people, so utterly in love, sharing an extraordinary bond, and considered nearly indestructible by their friends, gradually drift apart. The writing is so fluid, so masterful, that I could almost feel Hadley’s every emotion, the love and wonder, the ache and loss.

Sometimes I wish we could rub out all of our mistakes and start fresh, from the beginning. And sometimes I think there isn’t anything to us but our mistakes.

I hated, really hated Hemingway for the major part of the book, primarily because of his self-absorbed and egotistical nature, but then at certain times, I couldn’t help admire the drive and passion he had for writing and despite that I also couldn’t help wondering if it was due to this obsessiveness towards his craft that made him lose his true love, friend and muse.

Hadley, on the other hand was a delicate woman with a strong character. In fact, I’d say at times she was too nice, too trusting for her own good and rather naive. Her love for Hemingway was rooted at a much deeper level, that made her see only the positive in him and ignore the rest. I wish she didn’t. At certain points in the story, it felt like she even saw him to be vulnerable and full of self-doubt. Maybe, she was a bit too forgiving and maybe he took too much for granted.

The Paris Wife is a marvelously written, stirring story of love, loss and betrayal that would leave a mark upon the heart. One of those poignant romantic tragedies that is very difficult to forget. I absolutely loved Paula McLain’s writing. Just browse through the quotes of this book and you’ll know what I mean.

But in the end, fighting for a love that was already gone felt like trying to live in the ruins of a lost city.

I adore your organized chart at the bottom – it’s a gorgeous and easy way to see exactly how you felt about a book.

Also, I appreciate this review. I’ve heard some good things about this book, but cliches and slow writing can be hard for me to swallow. So I’ll remember not to prioritize this one for now.

Also, welcome to the book blogging community! Hope you’re enjoying it so far!:)

Thank you so much! The book-blogging community is awesome 😀

Although this book is slow at times, the writing is so beautiful, it almost makes up for it, but I understand if you don’t want to put it on top of your TBR. I plan on reading McLain’s Love and Ruin soon, and we’ll see how that one goes!