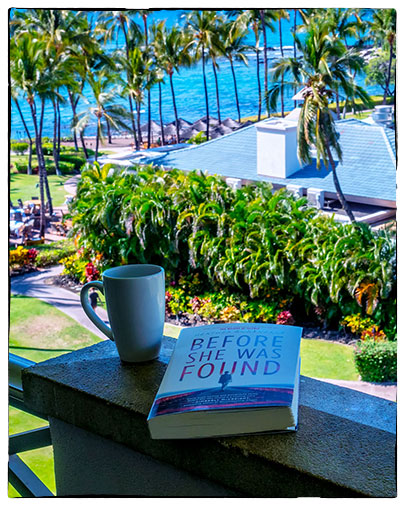 For twelve-year-old Cora Landry and her friends Violet and Jordyn, it was supposed to be an ordinary sleepover–movies and Ouija and talking about boys. But when they decide to sneak out to go to the abandoned rail yard on the outskirts of town, little do they know that their innocent games will have dangerous consequences.

Later that night, Cora Landry is discovered on the tracks, bloody and clinging to life, her friends nowhere to be found. Soon their small rural town is thrust into a maelstrom. Who would want to hurt a young girl like Cora–and why? In an investigation that leaves no stone unturned, everyone is a suspect and no one can be trusted–not even those closest to Cora.

Before She Was Found is a timely and gripping thriller about friendship and betrayal, about the power of social pressure and the price of needing to fit in. It is about the great lengths a parent will go to protect their child and keep them safe–even if that means burying the truth, no matter the cost.

I think stories inspired by true crime cases are more menacing than those that are simply an author’s imagination. One of the reasons why I was truly unsettled by this chilling thriller called Before She Was Found by Heather Gudenkauf is because it is inspired by the disturbing 2014 case of Slender Man, where two young girls lure another into the woods and stab her nineteen times, just to impress (that’s right) the urban myth known as Slender Man. If you’re not familiar with the case, and intend to read this, I’d recommend looking up the case details after finishing up this book, not before.

Before She Was Found opens with three twelve year olds, Cora, Violet and Jordyn sneaking out to an abandoned train track at midnight during one of their sleepovers. Things turn ugly pretty quickly and when the police find them a couple of hours later, Cora has been brutally stabbed, Violet is in deep shock and barely speaks a word, while Jordyn is completely unscathed but is unwilling to share what happened.

As the story unfolds, we realize how different the three girls are. Jordyn is the popular mean girl, Violet is the new girl who has recently relocated from New Mexico and is still finding her place whereas Cora is the misfit, whose best friend moved away a while ago and she is lonely and desperate to find a new friend. What brought these three girls together? Why would they have a sleepover when they are not even friends? And most importantly, what prompted the dangerous endeavor of sneaking out at midnight to a deserted train track?

The format of this book is pretty unique. There are multiple point of views, journal entries, text messages, chat room conversations and police interviews, all combined together to give a comprehensive look into the overall plot. I believe the author did a wonderful job of blending together these various formats and giving the story a more realistic feel.

This story is much more than a simple police investigation. Of course, the crux of it is unveiling what led to the sinister crime and finding out the culprit, but underneath it all there’s plenty of family drama, emotional dilemmas, blame games, pranks and tricks and above all the dangers of the necessary evil that is the Internet. I think along with writing a gripping thriller, the author has managed to convey a very important message of how destructive Internet can be, particularly to adolescents, sometimes even leading to dire consequences.

Oh, and finally let me tell you a bit about the ending (no spoilers, of course). It was very unexpected, but in a good way. I could never have seen that coming. Yes, there’s a satisfaction to guessing plot twists but when the author manages to pull off something you never imagined, there’s a contentedness in that as well and Heather Gudenkauf completely took me by surprise with that ending.

Before She Was Found is a sinister story, brutal and menacing with quite a few cringeworthy and very visual scenes that bothered me. And yet it’s an exceptionally well done thriller that also takes into account some important social issues. Read it, if you’re on the lookout for a quick, gritty suspense inspired by true events.

Disclaimer: A free finished copy was provided by Park Row and TLC Book Tours in exchange for an honest review. All opinions are my own.

I love thrillers that have an ending I can’t predict! It’s really the measure I use for a good thriller. Thanks for being on this tour! Sara @ TLC Book Tours